Building from its pioneering role as the world’s first commercial launch services company, Arianespace has compiled an impressive track record since 1980: conducting a combined total of 318 launches with 688 spacecraft passengers for more than 100 customers, representing a total payload mass of nearly 1,450 tons.

“Any payload, to any orbit…anytime”

These missions – performed by Ariane, Vega and Soyuz launchers – have fulfilled Arianespace’s motto: “Any payload, to any orbit…anytime.”

Since Arianespace’s first commercial mission (performed in May 1984, orbiting the U.S. telecommunications satellite Spacenet F1), the company’s launch leader has been its Ariane family – with the Ariane 1, 2, 3 and 4 versions in service through 2003 in flights from Europe’s Spaceport in French Guiana. Overall, this series was used in 144 launches.

Performance growth, from Ariane 1 to Ariane 4

Payload lift capabilities to geostationary transfer orbit (GTO) ranged from 2,370 kg. for Ariane 1 at its service phase-out in 1986 to nearly 4,900 kg. with the most powerful Ariane 4 configuration (designated Ariane 44L), which was flown for the final time in 2003.

The successor Ariane 5 is Arianespace’s heavy-lift workhorse, having performed 108 missions to date from the Spaceport since the 1990s. Its payload lift capability to GTO is 10 tons (increasing to 20 tons in missions to low-Earth orbit).

Arianespace’s launcher family expanded with two complementary vehicles: the medium-lift Soyuz, which has been used from Kazakhstan’s Baikonur Cosmodrome since 1999 in conjunction with Arianespace’s Starsem affiliate; and from the Spaceport in French Guiana beginning in 2011. Soyuz has a payload lift capability to GTO of 3,250 kg. (up to 4,400 kg. in missions to Sun-synchronous orbit).

Rounding out the current Arianespace launcher family is the light-lift Vega, having entered service at French Guiana in 2012, and capable of carrying payloads of 1,500 kg. to Sun-synchronous orbit at an altitude of 700 km.

The next chapter for Arianespace: Ariane 6 and Vega C

Arianespace’s competitivity for the future will be ensured with its two upcoming launch vehicles: Ariane 6 and Vega C. 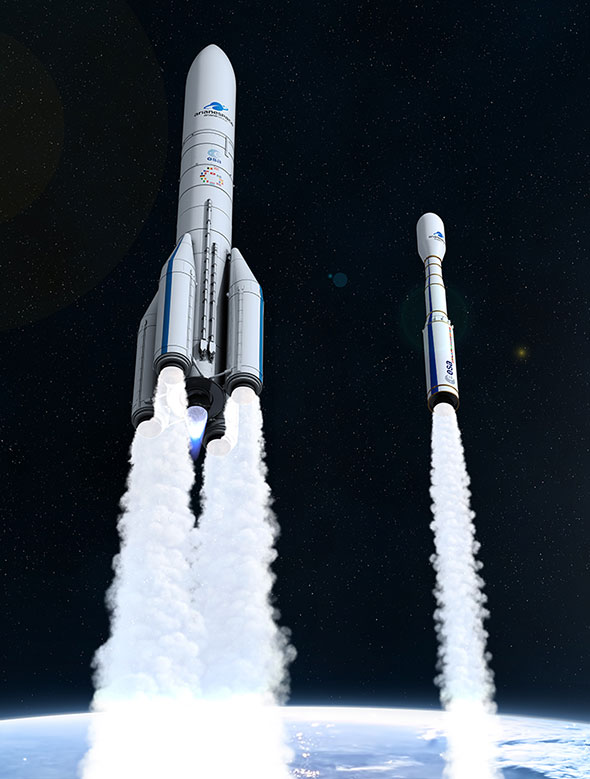 Ariane 6 and Vega C (left to right) will ensure Arianespace’s competitiveness in the future.

Vega C responds to the needs of the increasingly dynamic light-lift launch market services, delivering a payload capacity to Sun-synchronous orbit of 2,200 kg. In addition to accommodating passengers from nano-satellites to larger optical and radar observation spacecraft, Vega C’s payload adapters will facilitate the deployment of multiple satellite passengers, including arrangements that enable primary payloads to be launched along with small CubeSats or micro-satellites.

Ariane 6 is designed to provide new levels of efficiency and flexibility across a full scope of commercial and institutional missions. To be available in two versions, it features a modular configuration based on core stages powered by lower and upper liquid propellant modules, supplemented by either two or four strap-on solid rocket motors. The A62, fitted with two solid rocket motors will have an initial performance to geostationary transfer orbit of more than 5 metric tons; the A64 version with four solid rocket motors has an initial performance to GTO target of 11 tons (with growth potential).

Further contributing to Ariane 6’s competitiveness will be the series production of its rocket engines and a technology-sharing approach with Vega C – particularly the lightweight launcher’s P120 engine, which also will be utilized in the solid rocket motors on Ariane 6.

The post Four decades of setting the launch service standards is celebrated by Arianespace appeared first on Arianespace.